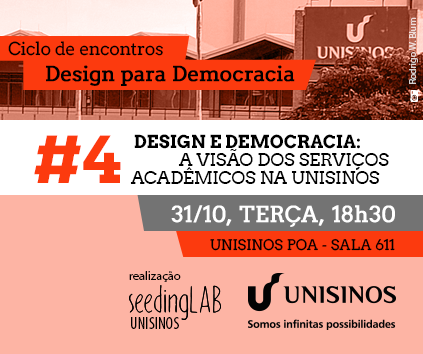 A public debate organized by SeedingLab Unisinos
Facebook event at this link.

In response to a letter from the designers Ezio Manzini and Victor Margolin entitled “Stand Up for Democracy”, the SeedingLab (Laboratory of Strategic Design for Cultural and Social Innovation affiliated to DESIS Network) has created a series of events to discuss the role of Design for Democracy : to question it, to strengthen it, to break it, to recreate it … in short, to give voice to a renewed citizenship, aware of its role and its action. In this fourth meeting the guest is Prof. Dr. Vinicius Costa de Souza, Director of the Unisinos Academic Services Unit.
Pictures of the event at this link.
> Go back to all Events